I've never been one to shy away from Lanthanum chloride, a product used in our hobby to bind up and export phosphate from a reef tank. Not only did I feel like I'd found the magic elixir the first time I used some, I've been a huge advocate for more than a decade. Two months ago at MACNA, Two Little Fishies introduced their version to the attendees named Phosban-L.  Phosban has been a powdered version of GFO for a long time, used in a Phosban Reactor or similar device. Phosban-L is not just a liquid additive, it's a bottle of concentrated Lanthanum chloride.

I build a lot of acrylic products for my customers, and take pride in my work. This is dosing reservoir that was recently ordered, and it came out really nicely.  Each zone holds 1g of solution, such as Alkalinity + Calcium + Magnesium + Acropower perhaps. Dimensions are as follows: 21.25" long x 5" deep x 12" tall.  I used a blue base for a nice look that matches the custom Sump and Top Off Reservoir the buyer ordered. 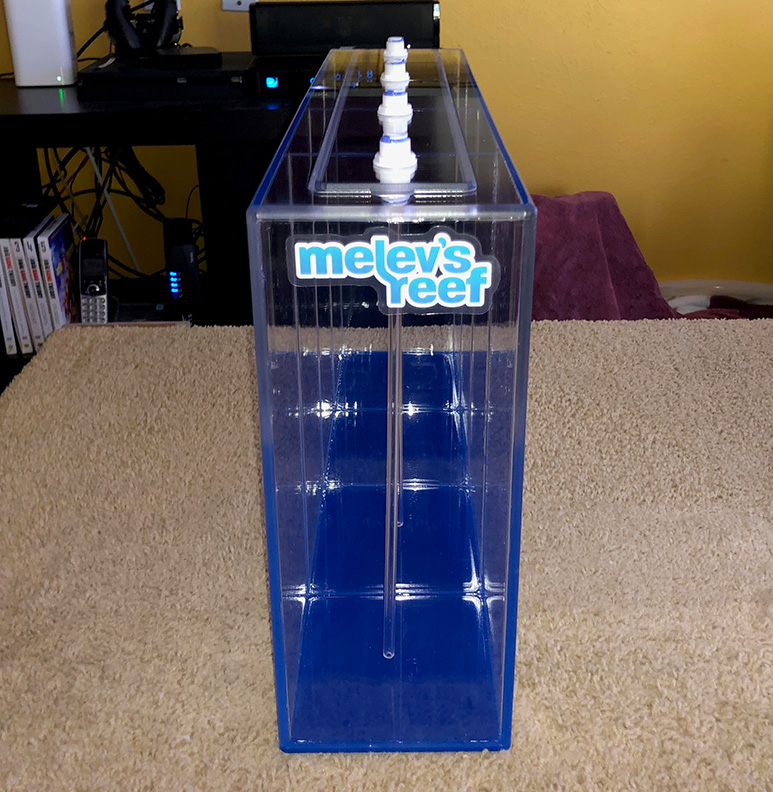 A customer requested I build a fan bracket that fits her rimless sump, so I designed something different that the CNC could cut out. I also changed the order of gluing joints, and I think overall it's a nicer looking final product. This is a single fan holder, and a 120mm fan drops into that spot.  I usually build double fan brackets. Small 1/4" notches were cut to fit over the vertical walls of a rimless sump.

Video: How to dose Phosphate Rx

Years ago, I came up with an acrylic bracket to keep food in the display tank instead of letting it float across the surface and into the overflow (thus down into the sump, wasted and uneaten).  I called it the Eheim Chimney, as it was made to fit the Eheim Autofeeder system.  Turns out it fits the Apex AFS just as nicely.  I usually suggest the person simply put it on top of the overflow box since that's a great place where it won't be knocked off into the tank.  If the overflow box doesn't have a lid, I can make that as well.

While every fan tray I build is custom made to fit a particular sump, this one took more time and a little imagination to fit one customer's needs. This bracket will fit on a rimless sump, nestling down on the front wall and the inner partitian and stay there. I added a front and back piece to hug the spot so it won't be going anywhere accidentally.

It holds two 120mm fans, and is made of 1/4" clear acrylic. It actually took more time than it should have, but that's the nature of creativity versus a cookie-cutter product. I kinda like it. :)

Biopellets - what you need to know

One of the topics I wanted to address as a full video is biopellets. Short answer: they work.  Earlier this year, nitrates spiked in my reef and despite lots of effort it didn't get them down and keep them down, so I opted to get biopellets running again on my 400g reef.  The results were spectacular, as expected.

It's those little things that make life more enjoyable right? Here's something new I'm very proud of, a good looking coffee mug with my favorite website emblazoned on both sides.  No matter how you hold it, you'll show your friends which website you turn to for knowledge and purchases. You can order mugs here: https://melevsreef.com/reefshop/reef-wares/the-mug