I recently received the brand new electronic Neo-Therm submersible heater from Cobalt Aquatics. I was excited to test it out, because it doesn't look like any heater you've ever had before. It's about the thinnest I've ever seen, measuring at 8mm or the unusual 1/3" listed on the box. The best news of all: a Three Year Warranty. Any product that has a 3-year warranty is good in my book, because that usually means the company believes in it enough to make that promise. It is rated to keep the temperature at +/- .5º F, which is a very tight tolerance, and is UL listed. 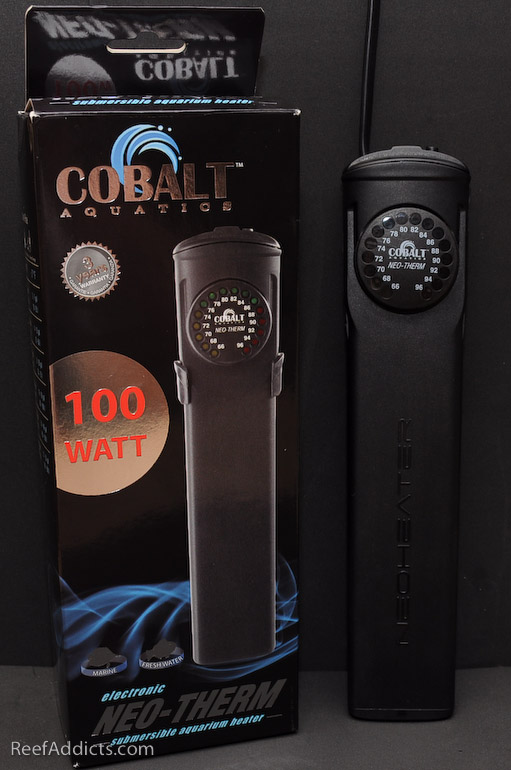 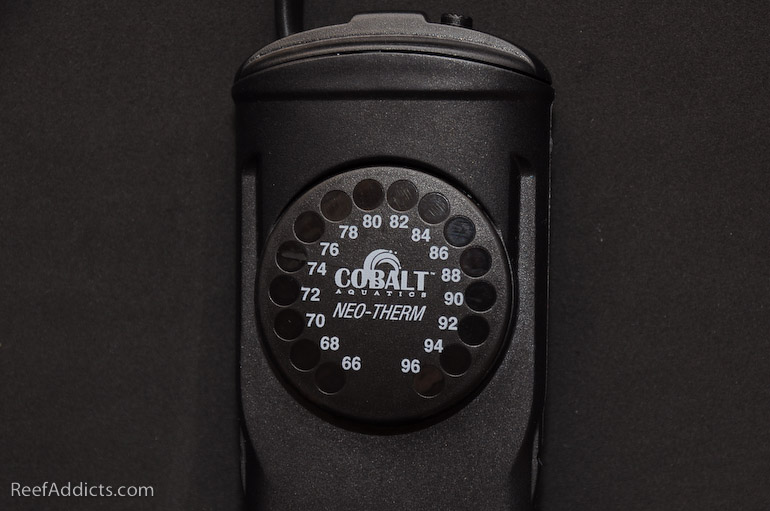 It's important to match the heater's wattage to the total water volume of your aquarium (and sump if applicable). The Neo-Therm 100w heater is rated for 16-26g, which was perfect for my test. I have a barrel full of live rock with only a powerhead for circulation, and the water volume is probably about 24-gallons total due to displacement by the rock. 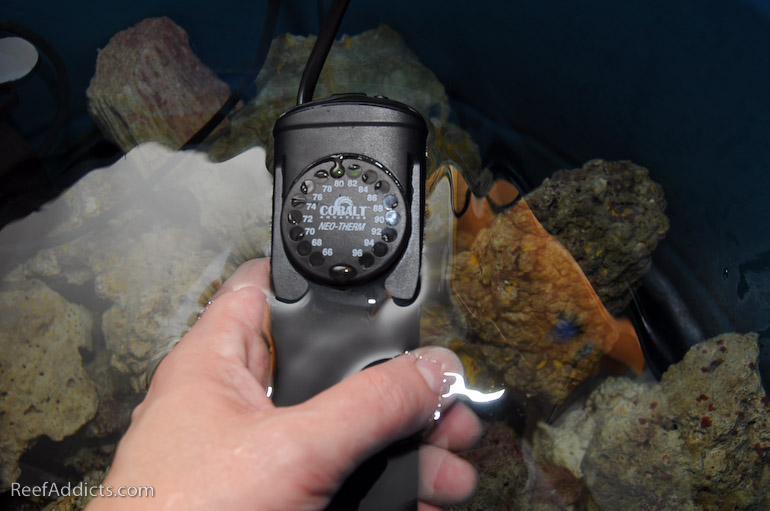 According to the instructions, it should be installed/immersed for 15 minutes before plugging it in, presumably to allow the temperature of the device to equalize before it is put into service. After waiting, I plugged in the two-prong plug into an outlet and watched the LEDs race around the display. It quickly settled to two lights. A solid one representing the temperature setting of the heater, and a slowly blinking light indicating the temperature of the water. Out of the box, it was set to 78º F, and the water measured 76º F. Pressing the button once on top of the heater moved the solid LED light to 80º F, with confirmation by the rapid blinking LEDs around the dial once more. It took about 2.5 hours to raise the temperature of the saltwater 4º degrees in my test barrel. 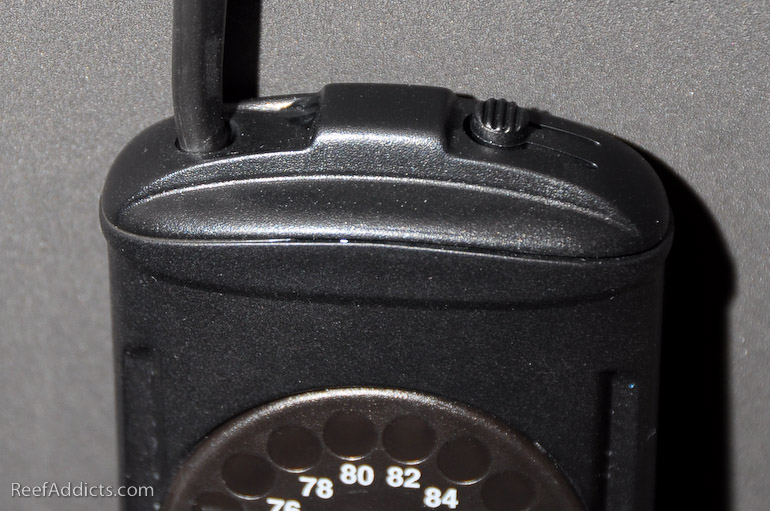 Setting the heater is easy. There's one button on top of the heater. Each time you press it, it raises the set point temperature 2º, all the way to 96º F. To lower the temperature, depress the button again and it will circle to the lowest point at 66º F -- keep pressing the button over and over to work your way up to the desired spot. Simple, and very easy to read. 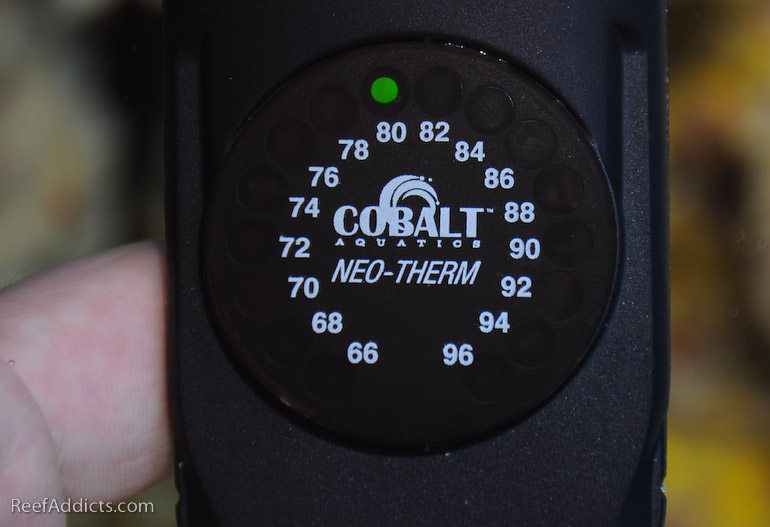 The Neo Therm seems to be indestructible. You don't see the heat coil; there's no glass at all. The shatterproof case provides a sense of security, and you'll never see this heater roll off your counterduring those occasional cleanings.

If you have a black background in your tank, the heater will blend nicely against that backdrop, helping hide it from sight. The light on the heater lets you know it is powered, and if the light blinks slowly it is warming up, and if it is blinking faster, the water is warmer than the set point. The heater comes with a holder and supplied suction cups, to keep it in an upright position where you want it. If you desire the heater near the front of your sump or aquarium, insert it into the bracket with the lighted display facing you. In terms of placement, it measures just shy of 10" tall, and is 2" wide. The directions state that it needs to be fully submerged in its upright position, but I'd probably have to lean it a little in a slightly shallower zone of my sump making sure the heating element - the main flat section - is under water. 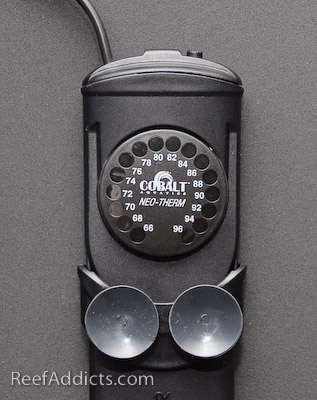 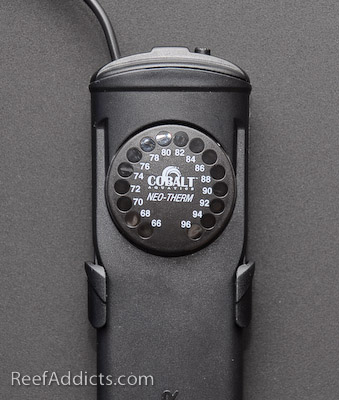 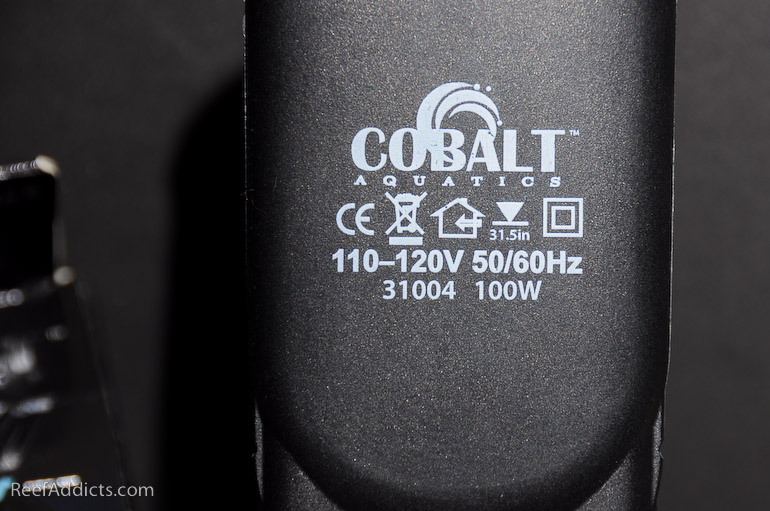 As with any heater, we don't want it turned on when exposed to air. During water changes, be sure to unplug it or flip off the switch on your control center if you have it set up that way. If you have a controller, disable the heater during the water change, then remember to turn it back on as part of your "resume all" routine.

Also, directions recommend it doesn't touch anything so it won't get burned. I don't think a seahorse would try to hitch on this shape, and would hope that it would feel the heat and stay away. It should be set up where it doesn't touch the sand, rock, and/or the wall of the tank. In a sump it would be tough to not touch something in those compartments. While actively heating, I held it submersed in my hand and while hot it wasn't enough to burn my fingers. 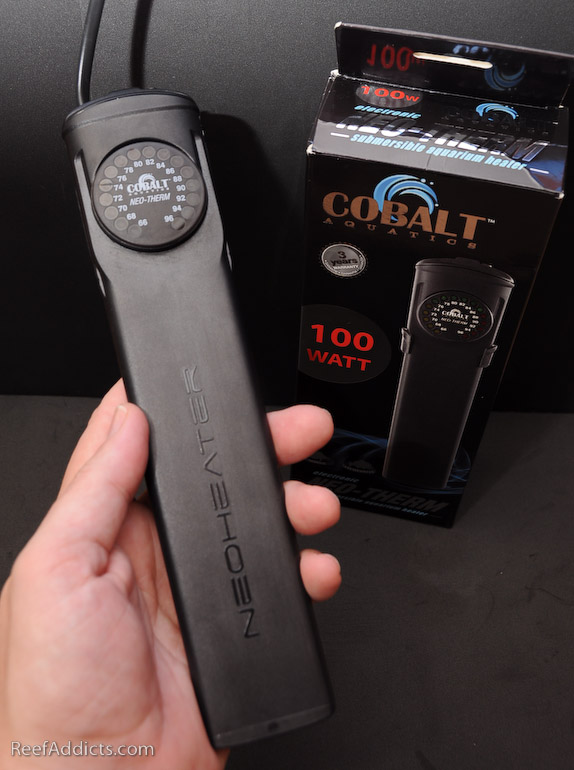 I like the fact that it doesn't look like a heater and that I don't have to worry that I might break it. It looks like it would be easy to clean, and that it has an easy to read yet not obtrusive display. If it was used in a display tank, I'd probably have it face the end panel to reduce what visitors saw from the main view, yet allow me to check the temperature at a glance. This should be a popular series of heaters for those Nano tanks with limited space, even fitting in the back compartment of the All-In-One setups. It weighs half a pound and feels solid, something trustworthy rather than flimsy.

This product was sent to Reef Addicts free of charge for the purpose of this review. 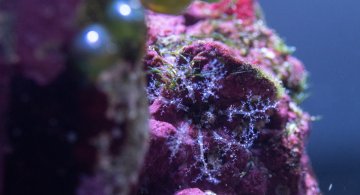