When I first heard about Safety Stop by Blue Life USA, I was intrigued. A small package containing two solutions to help fish shake off external parasites sounded very practical. So I made a call to Blue Life and asked more questions.

Right off the bat, the contents are Formalin (Part A) and Methylene Blue (Part B). These active ingredients are known useful solutions to bathe fish in to remove parasites. So if it isn't new, why the write up? The fact is, the majority of hobbyists do not quarantine their new fish. Every new acquisition dumped into your tank is the equivalent of playing Russian Roulette in that you may be lucky several times, but it only takes one widespread outbreak that kills off your beautiful and expensive fish to make you realize what a risk you've taken. For years, I told hobbyists "You don't want to put AIDS in your tank." That continues to be the most clear way I can get my point across. Please set up a quarantine tank, and use it.

Safety Stop does a few things. It helps eliminate external parasites, bacterial infections, and can also increase respiration significantly. When you get your new fish from another hobbyist, from the local fish store, or from the friendly UPS/Fedex delivery guy at your door, the fish is stressed. It may not have eaten in some time, and has been in the same bag of water for a while that likely has cooled off. That fish may even be a carrier, never showing outward signs of illness. It may have developed a tolerance against some disease when all was normal, but just went through quite a bit of handling to get into your door, and its immune system is likely compromised.

When adding that fish to your aquarium, the other fish smell the stress and may chase the new guy in its weakened state, even hurting or killing it. This is another reason to put new fish in quarantine for a few weeks; to allow it to recover, eat food without competition, and build up its fat reserves. Later, when added to the tank, it'll be up to the challenge of finding its own territory. That being said, I still think many of you are impatient or simply can't commit to a quarantine tank for a number of reasons. At least, you've got one new tool at your disposal now. 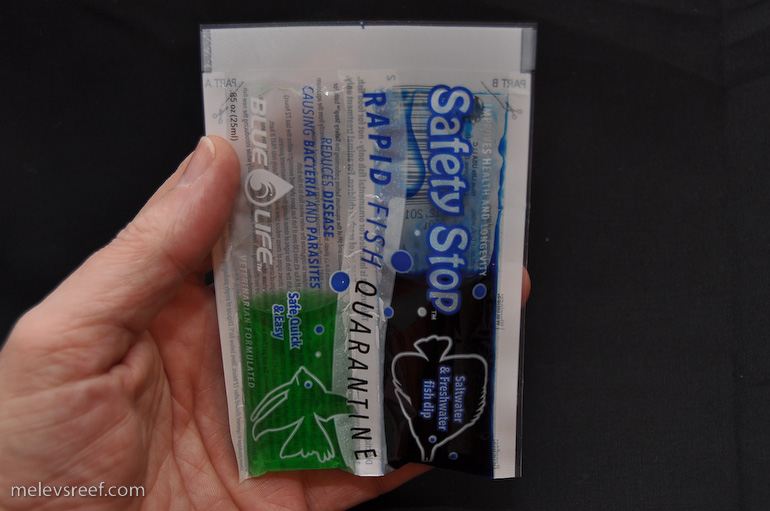 The way this product works, you acclimate the fish to the aquarium water first. Once this has been completed, Part A goes into a bucket containing exactly one gallon of tank water. Mix it well, add an air stone to bubble the water and keep oxygen levels up, add the fish and let it bathe in that solution for 45 minutes. Part B goes in another bucket with one gallon of tank water, and the fish moves to the secondary bath for another 45 minutes. Now it is ready to go into your (cough - quarantine - cough) tank, and should be less likely to infect any other fish. Safety Stop doesn't remove internal parasites, so it's not a bulletproof method but it IS a big step in the right direction. The dual-packet retails for $5, and will last several hours and multiple fish can go through the medicated baths before it is tossed out, so it's quite economical. I like it because it is easy to measure. Mix it with 1 gallon of water - done! This solution was formulated by a veterinarian, and has since been approved as safe for use with saltwater fish.

I ordered some, and once it arrived I ran up to my local fish store to get a new fish to try it out. I settled upon a Melanurus Wrasse because of its coloration and known to be reef safe. 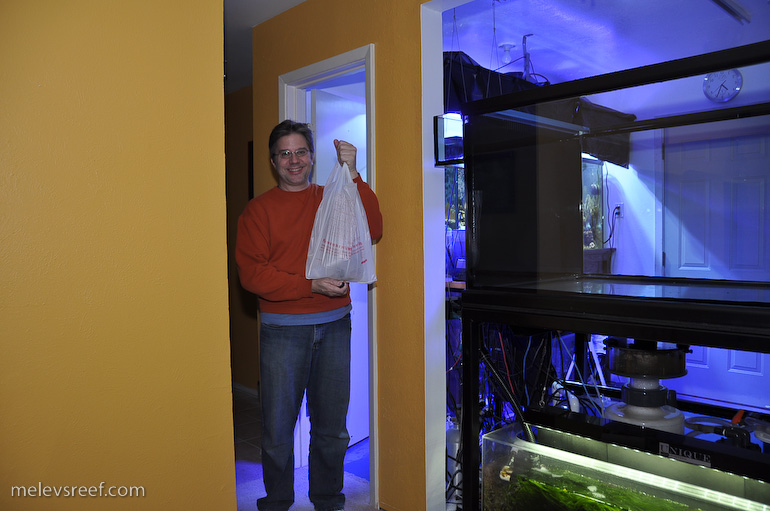 I also picked up a small automatic air pump, one that uses batteries when the power turns off for emergencies. For the purposes of this product review, I used it in battery mode only because it didn't have an override to use it plugged in. (Whoops!) 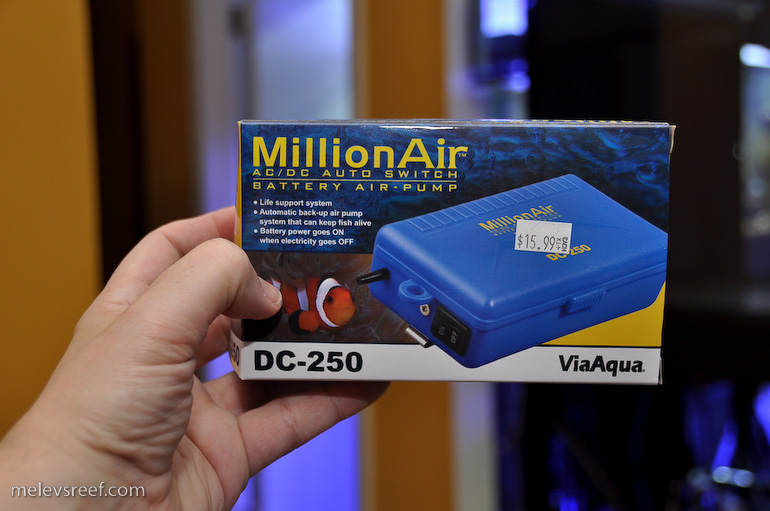 The new fish was floated in my sump to match temperature while I got the rest of my stuff ready. I used that time to measure out one gallon of water and mark the bucket with a black sharpie for all future baths. 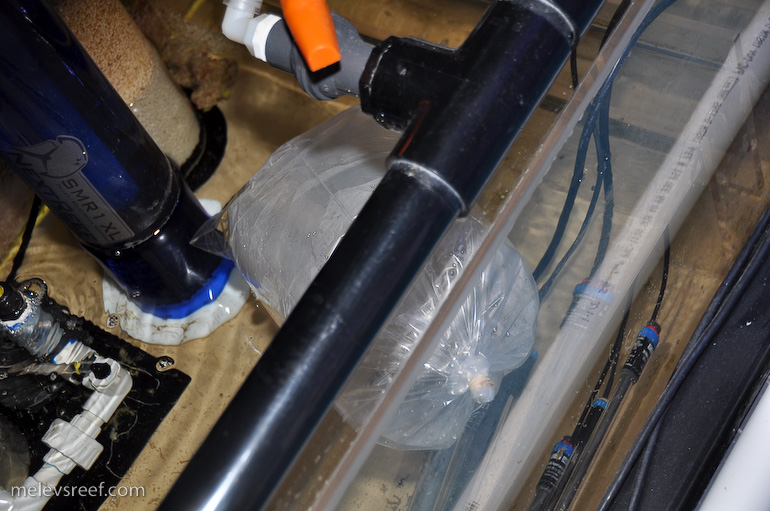 After about 20 minutes, the fish and the fish store's water was released into a clean bucket. 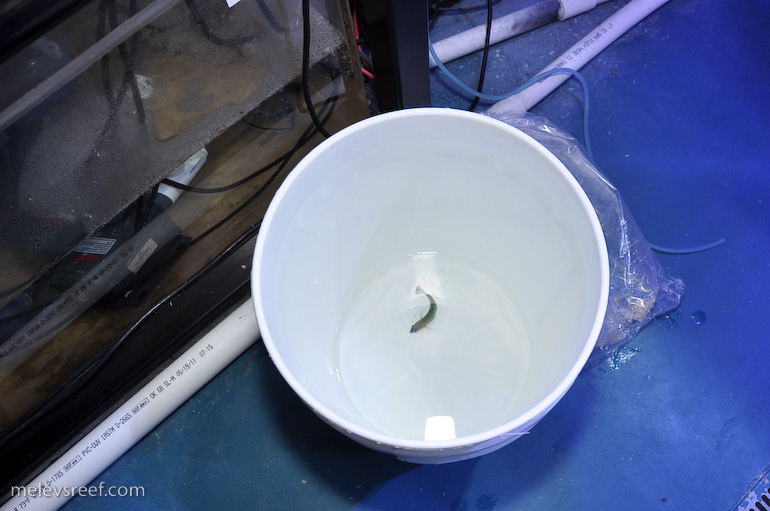 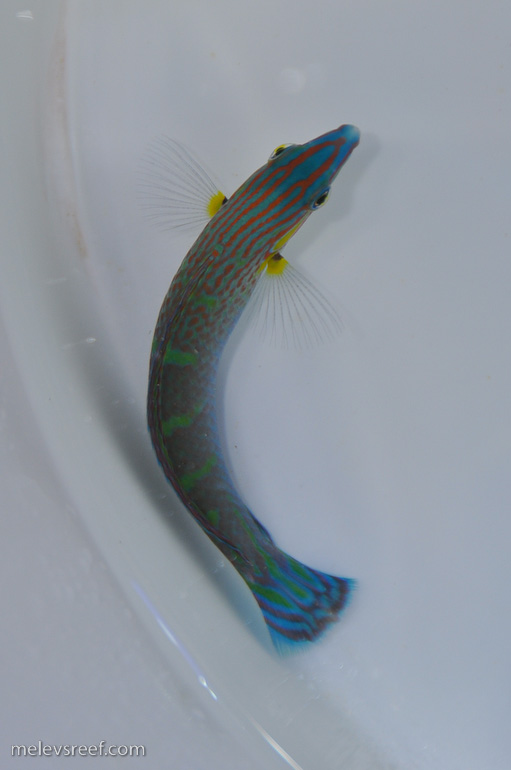 I fabricated this little rigid airline hook for drip acclimation. In the middle of the line is a drip irrigation valve (not pictured) to control the drip rate into the waiting bucket. The magnet simply kept the tubing in place so the drip was easy to see. 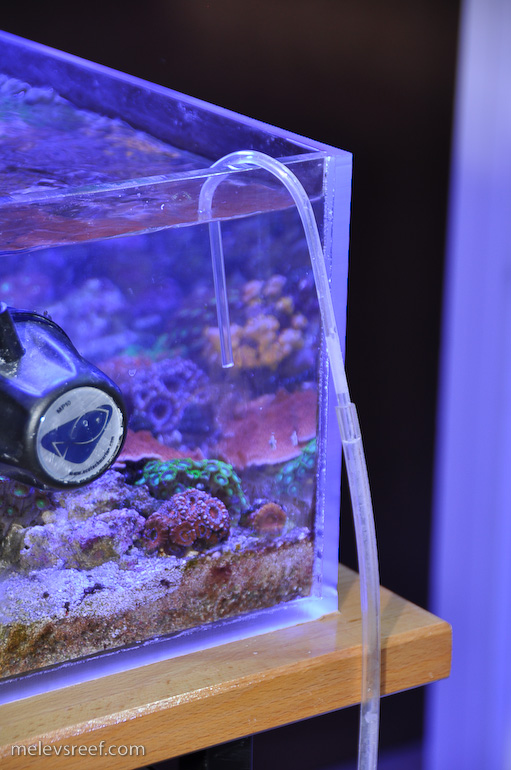 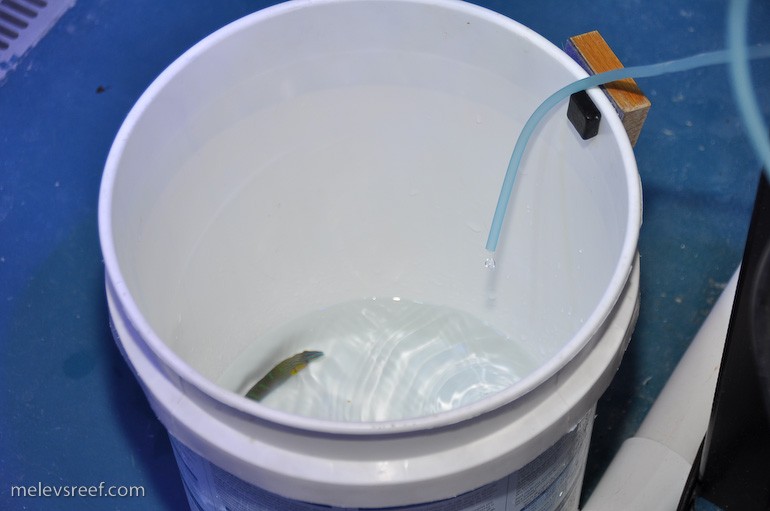 It took about 30 minutes or so for the water in the bucket to double in volume, which allows the fish to adjust to my reef's higher salinity. At that point, I set up the Part A solution in a neighboring bucket. 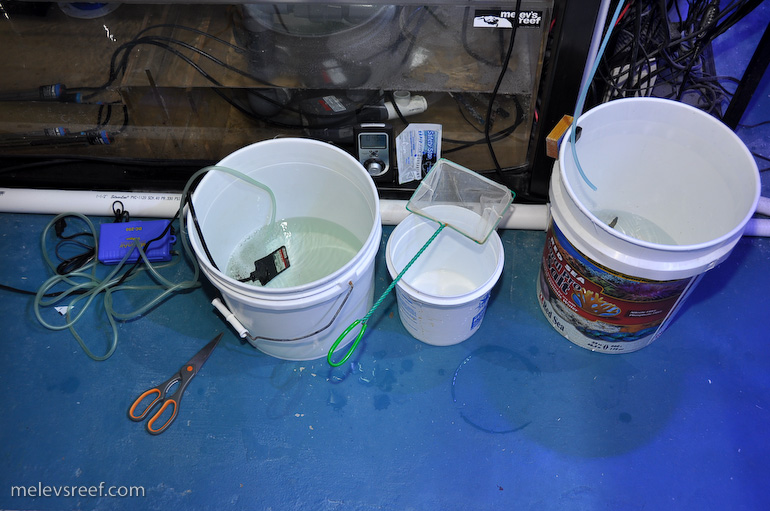 I scooped out one gallon of tank water and added it to the bucket on the left (pictured above), and added the very important air stone since formalin strips the oxygen from the water far too well. And since my buckets are on a cold concrete floor, I added an Eheim credit card-sized heater to make sure the water didn't chill during the bath. The solution packet indicates to cut off the corner and pour the solution into the water, and stir well. The fish was then moved via net from the drip acclimation bucket to the Part A bucket. 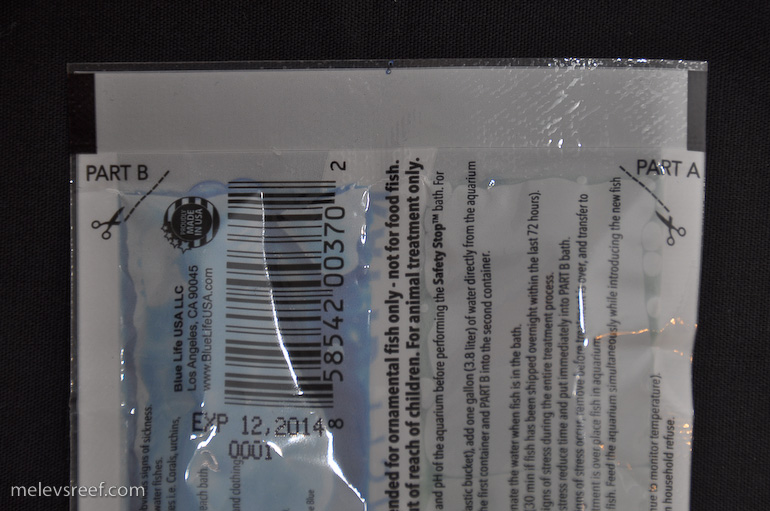 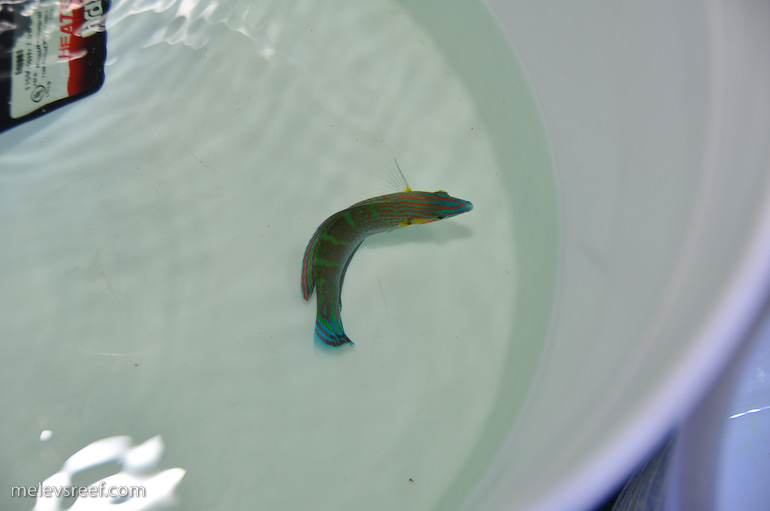 I set the timer for 45 minutes, but I watched the fish for any signs of distress. It seemed fine the entire time. After a few minutes, I was able to go do other things while it bathed, but I checked on it often just in case there was a turn for the worse. There was not. 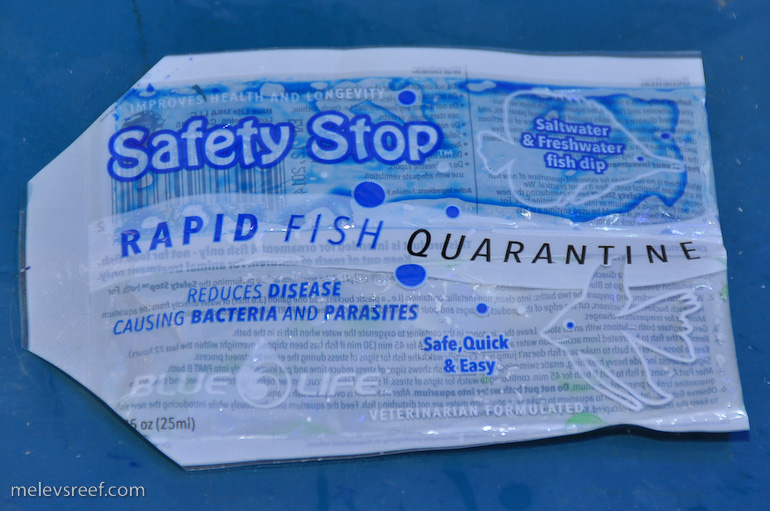 Near the end of the 45 minute period, I scooped out another gallon of tank water and put it in another bucket, and added Part B and stirred. It was very blue. I moved the heater over, and the air stone. Then I moved the fish into the solution and reset the timer. I watched the fish closely and it seemed unphased. Checking on it frequently, I noticed it had pooped which may have been pure coincidence and not attributed to the Methylene Blue solution. At the 30 minute mark, I notice the fish kept bobbing up to the surface, like it was trying to get more air, even though plenty of bubbles were coming off the air stone. Rather than wait another 15 minutes, I decided to move it immediately. 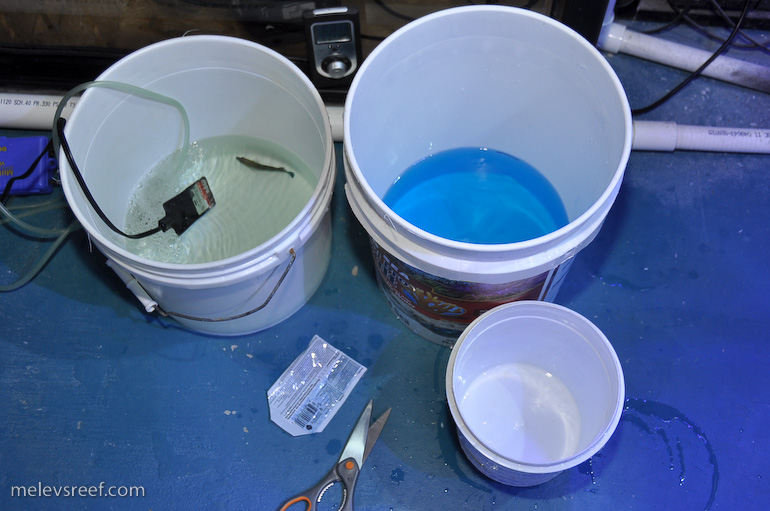 The fish was moved into what I call The Peacemaker in my 215g. If you are wondering why I don't have a quarantine tank running at this time, it's because the 215g is taking up all the room while the 400g tank is replaced. I've not been purchasing livestock and haven't needed one, but for the purpose of this product I had to get a new fish. The Peacemaker hangs suspended in the reef tank for new fish, where it shares the same water but can't be attacked. The fish wait in this safety zone for three or more days, and upon release into the reef, everyone seems to get along quite well. 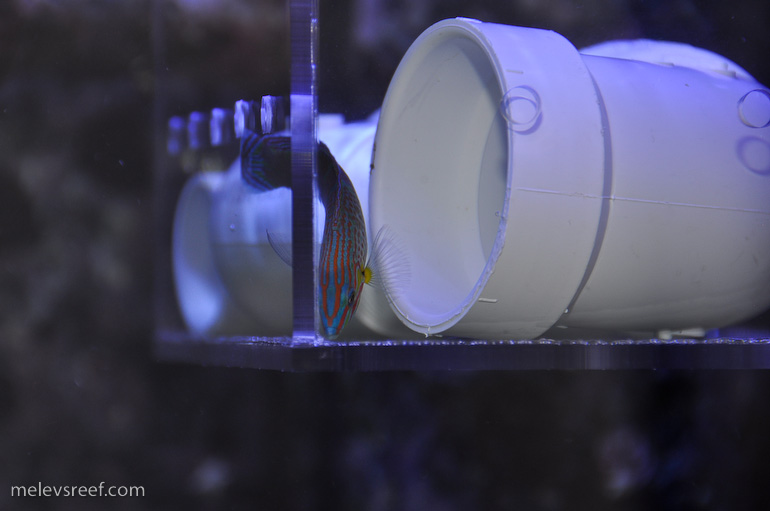 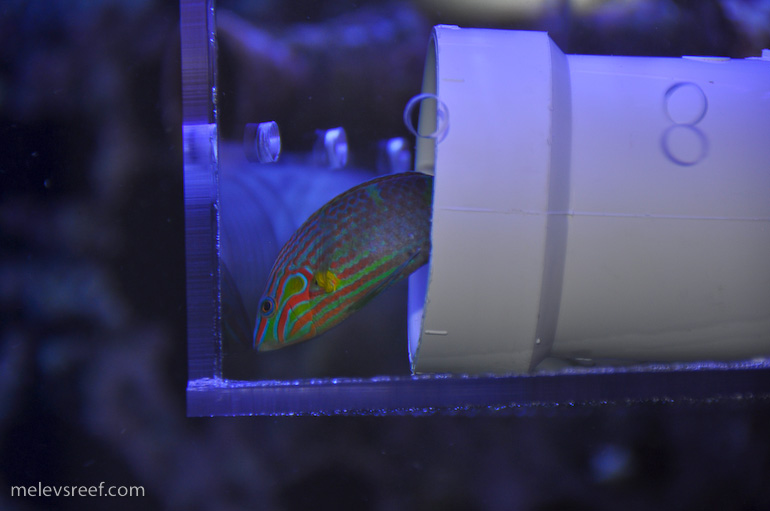 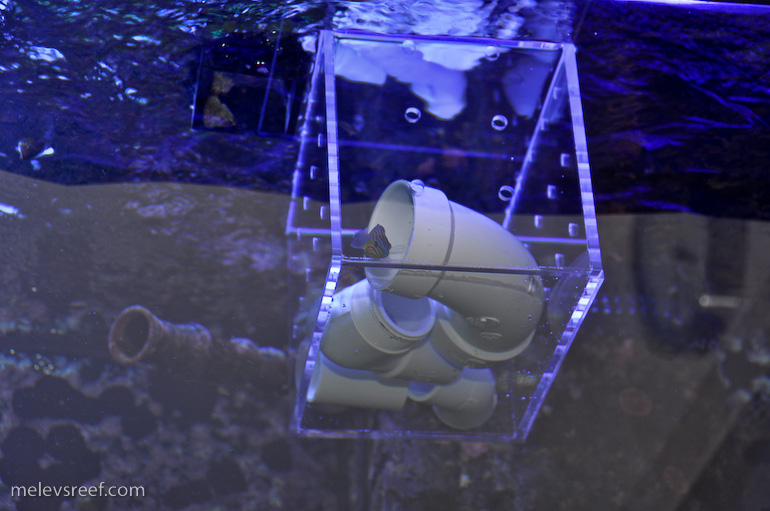 This box has a lid on it so the fish can't jump out, and the PVC fittings give it place to duck and cover if it feels threatened. About three hours after it was put into The Peacemaker, I squirted in a mixture of Cyclop-eeze and PE Mysis, and the fish was eating readily.

The final question is "did it work?" I can't answer that with authority. I know the fish never seemed stressed, and I was very careful to follow all the directions as well as read the cautionary tips. I didn't take scrapings of the fish prior to the dip nor after the dip, which would have to be studied under a microscope to determine if what was there is now gone. That's for those that love science. For me, a passionate hobbyist, I'd have to rely on their findings to get a absolute conclusion. I will be sure to update this article with how the fish does in the coming weeks, as well as to report if any other fish show signs of illness from the newcomer.

The process definitely adds extra time to the acclimation process of getting the fish from the bag to the holding tank, but I feel like I'm being more proactive than before. I'm not a fish disease guy, and when I have questions I go to those that know that topic. New fish go into quarantine to be fed and observed, and if nothing shows up after 21 days, the fish goes into my reef. This has always worked for me. But for those of you that like to buy a fish and add it to your tank the same day, this medicated double bath will surely reduce losses, and does so simply and economically. And that is a good thing.