In 2008, during a late night flashlight reef expedition, I discovered something new and somewhat alarming. When the light shone on the critter in question, it could be described as a bright orange worm. As soon as the worm sensed the light, it retracted with lightning speed deep into the rockwork's crevices, completely out of sight. 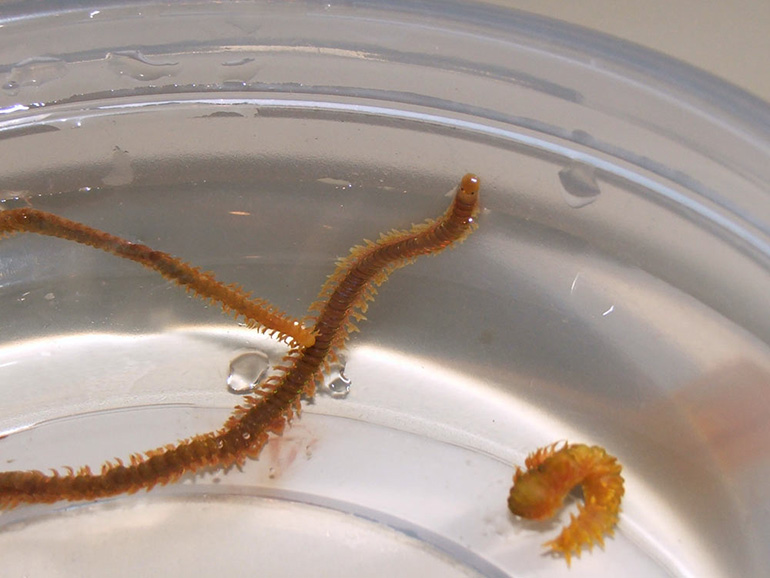 Unsure of its identification, it is still a pest that needs to be removed from the reef aquarium. By relating my experience, I hope to help you learn what it looks like, how it acts, and how to remove it. Here is my story:

When adding new snails to my reef, it is easier for me to put a bunch of them in a jar and place the jar on the substrate. That night, the snails will emerge, using the jar's surfaces as a purchase for their feet. Climbing out, they quickly spread into the reef. While checking on them well after lights out, that is when I saw this bright orange worm stretching fully into the jar from its hold in the rockwork. It was probably 4" or more into the jar, and about 1/8" thick. The unfortunate few snails that were still in the jar were already long gone. 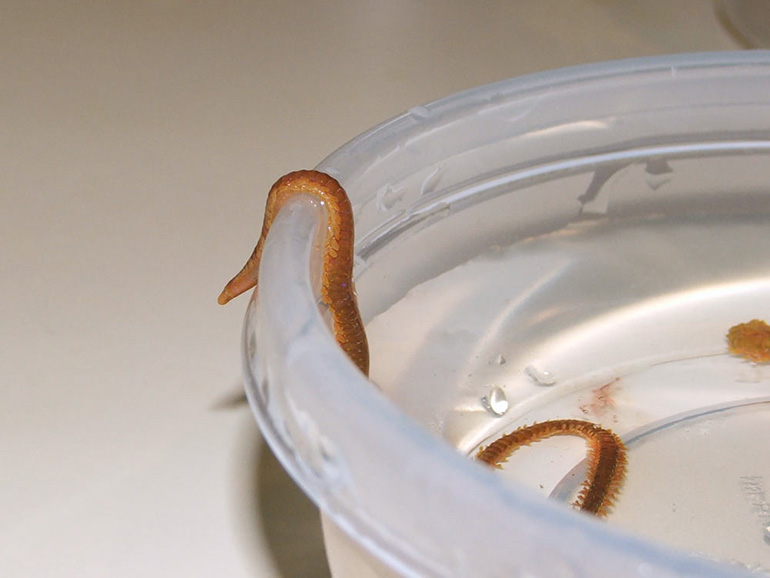 This worm exudes a type of toxic paralyzing ooze both for attack and defense. As it spreads this ooze ahead of itself, it stuns or kills its quarry, which it can then eat. This same ooze doesn't dissolve in the flow, but gives the worm a slippery cocoon to retract within as it snaps back into the rockwork. This is no Peanut Worm; it moves much faster when spooked. 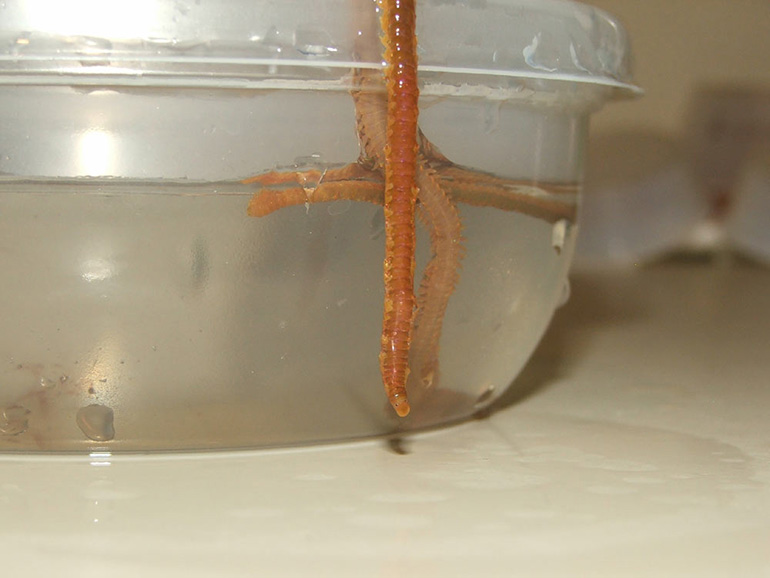 Now that I saw the worm as well as its response time, I had come up with a way to remove it. Additionally, whenever we find a pest, odds are there are more of the same lurking in the system. Carefully studying the rock and substrate, I discovered a few of these worms. I know for a fact that they will eat astrea snails as well as small T. maxima clams. They may even eat LPS polyps, although I've not actually caught them in the process - that's just a theory on my part at the moment (this article will be updated as more information is collected). In a tank with no snails or molluscs, they can survive on other food and even detritus. In other words, they can live in the system and become an obvious predator later when the conditions are target-rich. 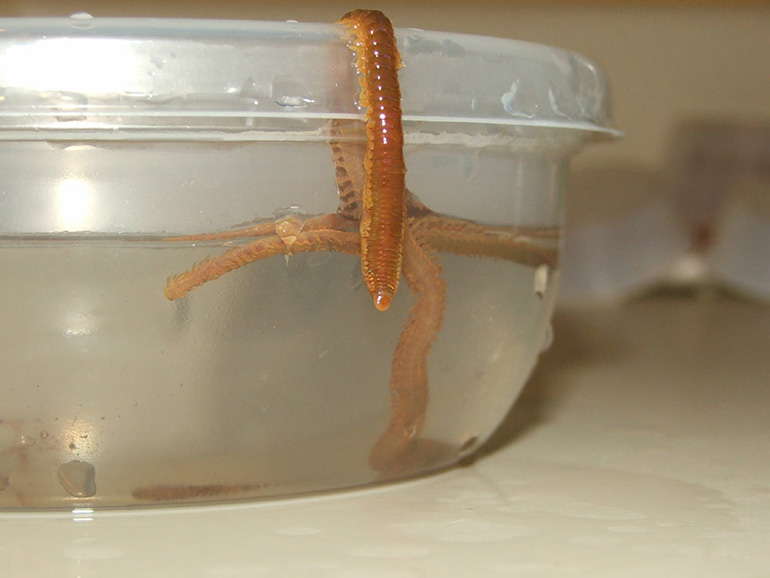 What has worked best is to turn off all the flow in the tank first. In this way, I can look down through the surface of my dark reef now that the ripples are gone. Carefully shining the flashlight beam at a nearby area, I make it a point not to let the light cast on the worm directly. Under the dim lighting, the worm doesn't feel threatened and continues to go about its business. Using some 8" forceps (giant stainless steel tweezers from many online vendors), I carefully lowered them down until the two tines are broaching the worm. Keeping your hand steady is key. Quickly squeeze the forceps together and don't let go. The worm will try to retract as soon as it senses contact. While grasping the forceps, pull the worm steadily from its hole. The slime works in your favor in this case, as the worm has no traction and slides out completely. The worm may stretch out to 14" or more during your tug-of-war (okay, that's an exaggeration but you did tug it out, right?) but its normal shape seems to be around 8" - 9". The pinched area may bleed. If you pull too hard, you'll break off a segment. Ideally, break off the head so it can't survive; tails can heal and regrow. It is possible to miss since the worm is quick and your forceps may snag on small bits of substrate or rock, leaving just enough gap for the worm to slip through and away. Check back 30 minutes later or the next night and you may find it in the same general area. 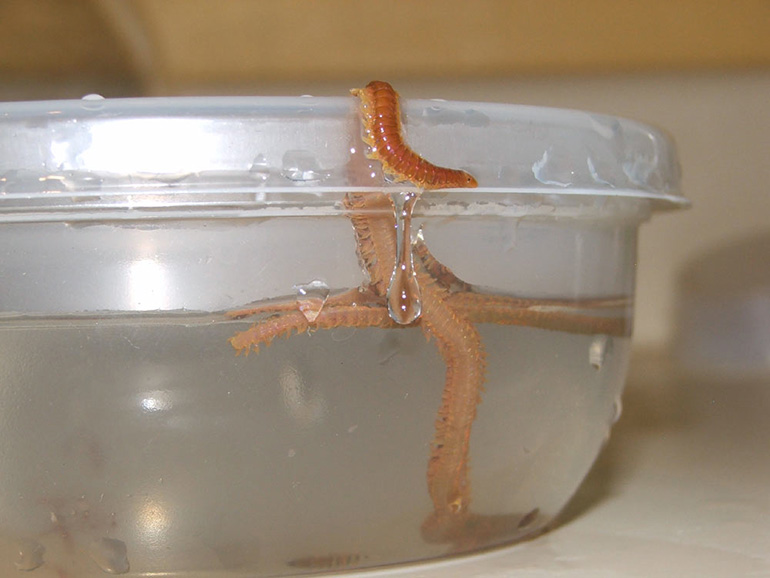 It's a creepy creature, and looks a little like an aquatic millipede. The first one I captured was put in a Salifert test beaker for observation and pictures. Surprisingly, the worm emerged from the water and was willing to crawl out and across my counter top. I spent some time observing it, and noted it has a ton of legs for locomotion, unlike the cilia that we see on Bristleworms. The head has two eye dots and a snout that looks like a platypus bill. As it stretched out of the water, the ooze it created was readily visible. I believe the gel is what allows this worm to exist out of water, as it can travel within it. Each time the worm pulls together tightly, that's when more of the gel-like substance appears. You can see it in the slideshow below. Check out the specimen working across the sink's drain! 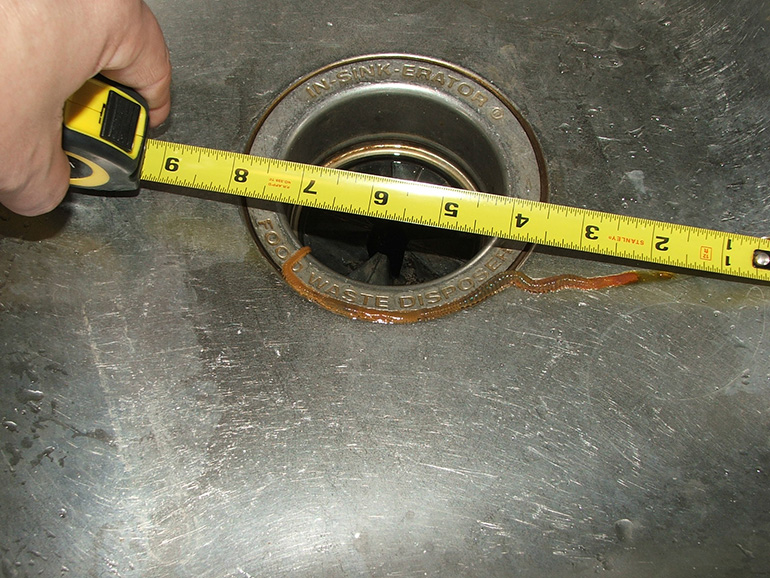 I never touched this worm, nor did I smell it or taste its ooze. My assumption that it is toxic is based upon the fact that the snails didn't try to escape their untimely end. They were either smothered or paralyzed in place, which allowed the worm to eat them.

Each night, I'd carefully study the rock for any signs of the bright orange worm. Since they are nocturnal, that's the time they are active. If I saw a hint of orange, I'd focus my attention in the surrounding area for further sightings since they tend to be 8" or longer. That doesn't mean they can't start off smaller, it just means I never saw any until they were quite large. I removed at least six from my system over a six month period. You may discover a strange sandy-tube on the sandbed moving in the flow, that was my clue that the worm had been there and had used it as a source of travel to its destination. They were discovered both in my 280g reef, my 20g angled tank, but not in my sump or suncoral tank. I did find two on the kitchen tile, dried up and dead. I'm not sure how they ended up down there, unless they were clinging to my canopy when I removed it and placed it on the floor. I saw one retract into a small rock covered with zoanthids, which I pulled out of my tank. I chipped away rock from the underside until I could snag it with the forceps to tug it out. I used toothpicks to block alternate exits so it would have no other choices. I was determined to remove it.

If you are losing clams or a lot of snails - more than you can credit to aggressive hermits - you too may have one ore more of these worms. Don't panic or rip your reef apart in search of these worms, just start hunting them down and extracting them. That's what I opted to do and will continue to do if I encounter more in the future. They are kind of neat to observe and I suppose someone out there would be happy to keep one in a species-only tank, feeding it snails on a weekly basis.

So what is it? I've contacted three difference sources and here are some of the guesses.

The only way to know for sure is to capture one and ship it to a worm expert. But I'm pretty certain I have the right identification in this blog. 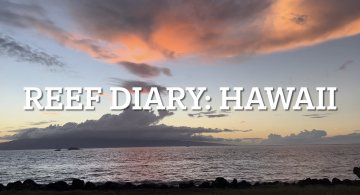 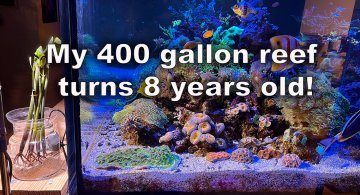 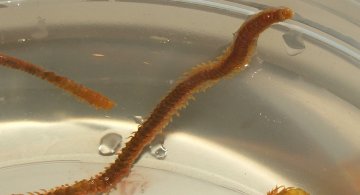