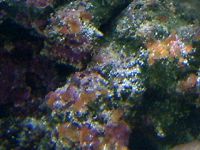 They feed on small foods like rotifers, phytoplankton and such, and will grow out of control unchecked. Creating a mat with their bodies, they can smother corals or parts of the substrate. If they get to the point of overpopulating the tank, there is the possibility that they may die suddenly all at once, and the toxin they release at death can cause further deaths and even wipe out a tank entirely. Some predators exist, but results vary. Six Line Wrasses, Leopard Wrasses, Target Mandarins and even Blue Damsels reportedly eat these flatworms, as does one Nudibranch (Chelidonura varians), but some have opted for a different approach when these methods prove ineffective.

Image #2 (on the right in this article) is of a benign flatworm.  These are usually opaque, have this distinct shape and do no harm.  Usually a few weeks after you spot these, they will vanish. 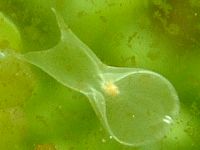 Salifert came out with an excellent product years ago called Flatworm eXit, a poison that only affects flatworms and is reef-safe. Let me add the qualifier that if your tank is heavily infested, Flatworm eXit will not be the cause if you lose livestock. The issue is that if many flatworms die at once, their toxins reach lethal levels quickly and this, not the product, can lead to deaths in your tank. Feel free to ask others about their results before using this product. When I used it, the only item in my tank that appeared distressed was my Hawaiian Featherduster. Its crown was shriveled up and wilted and it looked very unhappy during the treatment, but afterwards it opened up completely. SPS, LPS, soft corals and fish were completely unaffected, as were snails, starfish, crabs and pods. My infestation was low because I regularly siphoned out all I could see each week, before I ever dosed my tank.

What I recommend is that you remove as a many as you can before you treat the tank. This is what I used, the Flatworm Vacuum™ I put the bag in my sump, and sucked out all the flatworms I could reach and see. Starting the siphon was easy by putting the end of the rigid tubing in the flow of a powerhead. I siphoned out as many as I could find every day until virtually none were in sight. The less you have, the less toxins will be released when you treat. If you don't use a sump, you can put the bag in a bucket in front of the tank, and after the procedure, you might decide to pour the water back in your tank. If the water looks cloudy or reddish, it would be better to dispose of it and replace lost tank water with new saltwater.  Using airline tubing limits how much water is sucked out of the tank, allowing plenty of time to locate the flatworms without draining excessive amounts of tank water.

The day I was ready to treat my tank with Flatworm eXit, I mixed up 20g of new saltwater for a water change for my 55g reef tank. I also hooked up a canister filter filled with GAC (granulated activated carbon), and tested it to make sure it was ready to run.

I dosed the tank with approx 60 drops of the chemical (1 drop per gallon), and the flatworms started to come out into the open, and died. They would die on a string, and similar to webbing, multiples would die on that thread. I used my vacuum system to suck out all that I could see. After the first hour, I added 30 more drops and continued to observe the tank and siphon any dead or dying flatworms. My skimmer was always on, but the bubbles were depressed due the treatment, and it took a couple of hours before it began skimming again.

After 1 hour 20 minutes, I turned on the canister filter filled with fresh carbon to pull out impurities and toxins. The skimmer pulled out some stuff, but nothing like some of the horror stories detailed on the forums I read. I did a 20g water change, and they were gone.

It is recommended to repeat the procedure one week later, but forgot and never did treat the tank again.

About a month later I saw a few in my tank, but none thereafter. I had two Mandarins, a Six Line Wrasse, and a Blue Damsel to work on any possible flatworms if they were to reappear.

Some people take precautions when adding new livestock to their tank, performing a Flatworm eXit dip for 15 minutes prior to adding the coral to their display to prevent spreading these creatures.  This is an excellent preventative act that we should all emulate, to prevent the spreading of this pest to others.

A suggestion by Salifert to determine dosage: If you've been unable to kill them with the recommended dosage after two attempts, try this experiment. Take one gallon of tank water, and add a few flatworms to it. Add one drop of F.E., and stir. Wait and watch to see if it affects the flatworms. If not, add another drop, stir, wait and watch. If necessary, add another drop and stir. Wait 15 minutes each time, until you see the flatworms are obviously distressed. At that point, you'll know exactly how many drops per gallon it will take to kill the flatworms in your system. Keep in mind, higher doses of this product in your reef may cause issues with your livestock. The purpose of this experiment is only to find out just how resistant they are. 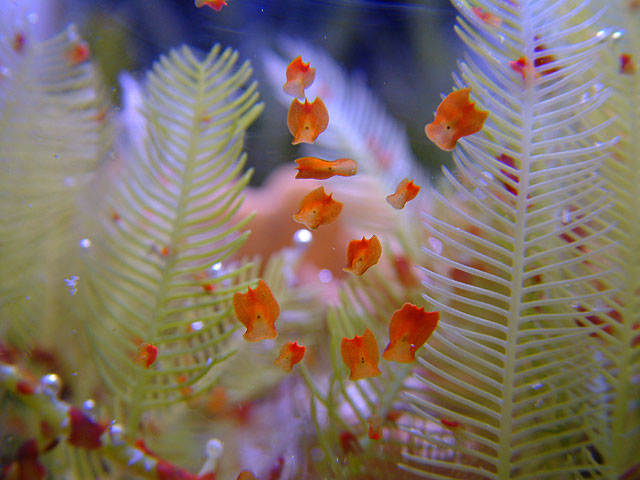 Note the triple points on the tail end in the picture above; this identifies these flatworms as red planaria

Update - With Aggressive Dosing, Be Prepared To Act:

You need to make a concerted effort to siphon out 75% - 85% of the total infestation before dosing your system.  The less worms, the less damage basically.  Mix up and age some saltwater for a few days, in preparation for a 25% water change.  The goal: to remove the toxins the red planaria release as soon as possible.

When you are about to use Flatworm eXit, all filtration should be off for the time being, but leave all the pumps on. No GFO, no biopellets, no skimming, no carbon. Within 15 minutes you'll see them dying. Siphon out all that you can see with airline tubing; they will be visibly active. You'll see some dangling off a weblike thread, and you may see 5, 6 or 7 of them like kites on a string. Siphon these out as they die. After a total of 15 more minutes, start up the canister filter with carbon (1/2 cup of GAC per 50g), and your skimmer. After an hour, do the water change. You can restart the GFO and biopellets therafter.

It may be necessary to re-treat the system to get the last of them a week later.  With the bulk of them gone, the second treatment should be easier by comparison.