Close-up of carbons tested in this two-part series. Clockwise from upper left-hand corner: Carbon from Lifegard, Hydrocarbon 2, carbon from ESV and carbon from Seachem. 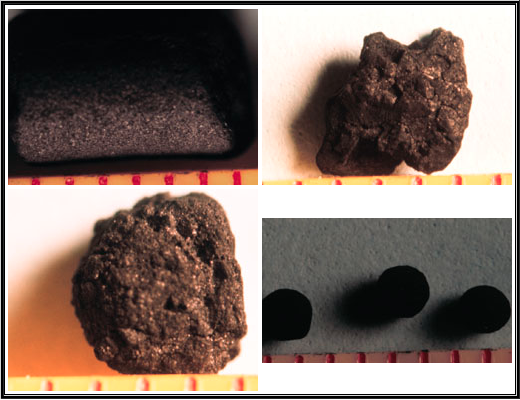 Granular Activated Carbon In The Reef Tank: Fact, Folklore And Its Effectiveness In Removing Gelbstoff Part 2

In Part One of this examination of carbon we looked at the ability of granular activated carbon to remove yellowing compounds (gelbstoff) from reef aquarium water. In this second installment we will look at issues surrounding the use of carbon in the reef tank.

Passive Use of Carbon

The first challenge to this method of using carbon was expressed by Julian Sprung in his “Reef Notes” column in Freshwater and Marine Aquarium. He wrote, “Placement of bags of activated carbon in such a way that water flows around them, but is not directly forced through them may be all that is necessary to maintain the water free of yellowing compounds” (Sprung 1995). Mr. Sprung elaborated on the “passive” approach to carbon filtering (Delbeek and Sprung 1994) stating that, “Through contact with the water flowing over the carbon, and through diffusion, organics will be taken up with less rapid depletion of trace elements than the prescribed method.” While many hobbyists have adopted this approach to using carbon, no evidence has been presented to the hobby that supports Mr. Sprung’s two assertions regarding passive use of carbon — first, that it is effective in removing color and second, that it is less likely to remove trace elements from the water.

To test Mr. Sprung’s contentions, I set up two tanks with carbon filters. The first — the “active” tank — was set up using the arrangement outlined in part one of this report. I placed 20 grams of Hydrocarbon 2, a lignite carbon distributed by Two Little Fishies, in an acrylic tube with water circulating from the test tank, through the tube and back into the tank.

A second tank — the ”passive” tank— was set up in a similar fashion, except that instead of placing the 20 grams of carbon in a carbon chamber, it was placed in a mesh bag. Additionally, instead of using a Powerhead to pump water through the carbon chamber, it was mounted on the side of the tank to circulate water in the tank so that water flowed around the mesh bag much as it would were the carbon bag placed in a sump.

Aged reef tank water was prepared as outlined in part one, so that the initial color of the water was 100 APHA units. Hourly color measurements were taken until color was reduced to zero in tank 1. Periodic measurements continued in tank two for the next 168 hours.

Figure 1 shows the results for the first 40 hours. The yellowing compounds were virtually eliminated in tank 1 in approximately five hours. Over the same period, nearly 70 percent of the color remained in the passive tank. As the graph demonstrates, color continued to decline for the next 24 hours, but the rate of decline decreased and eventually stopped at approximately 20 percent of the original color. Even after seven days, the water had a yellow cast to it. Because the same quantity of carbon eliminated the color in tank 1, it is unlikely that the carbon in tank 2 was exhausted. To explain why the carbon ceased to function, we have to turn to the mechanism by which carbon works.

Carbon removes color and other large organic molecules from water through adsorption. Adsorption is the chemical bonding of the target molecules to the carbon (Moe 1989). Carbon is most effective when it is dry. It is most “attractive” to these molecules at this stage. As Spotte (1992) explains, “Adsorption rate is a mass transfer process, limited by factors that control diffusion...The greatest adsorption rate takes place immediately after ’wetting’ because the concentration gradient is steepest.” Spotte, quoting Morris and Weber (1964) writes, “The quantity of dissolved organics removed by activated carbon is not a linear function with time...absorption involves the rapid formation of an equalibrium interfacial concentration followed by slow diffusion.” (Spotte 1970) In other words, carbon is most effective when first put in the tank and gradually becomes less effective as it does its job. Carbon, whether used actively or passively, is most useful at the start of its use. Extended use of carbon suffers from diminishing returns. Passive use of carbon works to some degree, but will not eliminate yellowing compounds. It is no replacement for active “flow-through” use of carbon.

Removal of trace elements by GAC

Mr. Sprung’s second assertion about the potential depletion of trace elements by carbon has been repeated many times since his original column. John Tullock is the latest to join the fearful chorus by writing, “Others, including the noted Norwegian aquarist Alf Nilsen, have stated a suspicion that continual use of activated carbon can lead to stony coral bleaching if replenishment of trace elements such as iodine is not done on a regular basis” (Tullock 1997). Iodine is a minor element, not a trace element, and when added to seawater it quickly becomes predominantly iodide. Because of the excessive dosing fueled by such hand wringing, iodide probably accumulates as often as it is depleted in reef tanks.

Like many aspects of the hobby, this folklore has never been evaluated. To determine the accuracy of this claim, I removed approximately 5 gallons (20 liters) of water from my 300-gallon (1100 liters) reef tank and added potassium iodide from ESV until the water measured 0.1 milligram per liter (mg/L) of iodine/iodide as measured by the Seachem test kit. The purpose of increasing the iodide concentration to this level was to exaggerate the iodide gradient and make the detection of adsorption more likely.

The water was divided between two tanks. I placed 20 grams of Hydrocarbon 2 in one tank in the acrylic tube as before. In the second tank, the carbon was placed in a mesh bag. Both tanks were run for 48 hours and then the iodide concentration was measured. The Seachem test kit permits up to six side-by-side measurements, so both tanks were measured simultaneously with two replications. Measurements were taken at full strength and with a 5:1 dilution to counteract the difficulty of interpreting the color at the high end of the scale. After 48 hours, the passive tank had a slightly higher concentration of iodide as indicated by a slightly darker color at the 5:1 dilution. The color difference, however, was only detectable by directly comparing the colors, suggesting a minimal difference in concentration.

How much carbon should you use?

Converting the original volume of 3 pints into weight is more problematic. The weight of a given volume of carbon depends on the density of the carbon. Three pints of one of the bituminous-based carbons I tested weighed a little over 17 ounces. The same volume of the top performing lignite-based carbon weighed nearly 30 ounces. The coconut carbon fell between these two extremes.

Delbeek and Sprung also refer to the Wilkens and Birkholz (1988) recommendation of 500 grams per 100 liters, stating that this amount of carbon “is roughly equivalent (to the Thiel recommendation).” The 500 gram recommendation works out to be about 31 ounces, so it would appear that recommendations since Moe have been based on the weight of carbon. Because Albert Thiel is a strong advocate of coconut carbon, his suggestion of 3 to 3.5 pints of carbon implies a weight of approximately 20 to 25 ounces of carbon, considerably less than the other authors advocate.

A hobbyist following the recommendations of Hovanec (1993) to use bituminous-based carbon and Delbeek and Sprung (1994) to use 36 ounces of carbon could find him- or herself dealing with three-quarters of a gallon of carbon for a 50-gallon reef tank. In one of the more understated observations in their book, Delbeek and Sprung (1994, page 113) write, “although this recommendation does seem excessive, one could use it as an upper figure and work downwards.” Indeed.

er flowing through the water treatment system at 2 gallons per minute per square foot (gpm/sqft), treating nearly a million gallons of water a day (McCreary and Snoeyink 1977). Perhaps a review of the 10-year-old recommendation is long overdue.

Spotte (1992) recommends 1 gram of carbon per liter, one fifth that suggested by hobby authors. Even the author of the much quoted 10-year-old recommendation has rethought the use of carbon. Albert Thiel now advocates 3 level tablespoons per 50 gallons, about one-thirtieth of his original recommendation (http://www.netpets.org/fish/reference/freshref/carbmeth.html).

To better understand the impact of quantity on the removal of yellowing compounds, I ran three different tanks using 60 grams, 30grams and 15 grams of carbon. This is equivalent to 96, 48 and 24 ounces respectively for a 50-gallon tank. I used bituminous carbon from ESV for the test.

Thiel’s current recommendation of 3 tablespoons per 50 gallons is probably all that is necessary to keep a reef tank free of color. Thiel also recommends using carbon for 12 hours a week and then removing it. This too is prudent advice. A healthy tank, particularly one with an adequate foam fractionator, should not need much more than this duration of carbon usage.

Unfortunately, Thiel does not mention circulation rates through the carbon. As I mentioned in Part One, the typical pOver filter for carbon use moves water past the carbon at a much faster rate than research recommends. A popular canister filter for carbon use has a flow rate of 250 gallons per hour. Evidence suggests that adsorption rates decline when water moves past the carbon faster than 65 milliliters per minute, roughly one gallon per hour. Spotte recommends that no more than one tank volume be circulated through the carbon per day. Using Thiel’s 12-hour guideline combined with Spotte’s one tank volume suggestion, translates into a flow rate of about 4 gallons per hour for a 50-gallon tank. Clearly, using a pOver filter for carbon is not the best approach.

Thank you Richard for giving me permission to post your articles here on Melev's Reef.