What is the difference between a whelk and a Nassarius snail?  In the picture below, the creature on the left is a Nassarius snail, the one on the right is a whelk. Whelks get much larger, while Nassarius don't. At least Nassarius vibex, that is.  And all the images at the top of this article are Whelks, an unwanted snail in a reef system. Read on... If you look at the texture of their snouts, there is a specific pattern "tattooed" onto the flesh of the Whelk. Also, the Whelk has a protective shell on its tail that it uses to seal itself in its shell when in danger. This gives it a water tight seal.

Whelks don't travel too quickly, in my experience. By comparison, Nassarius glide across the sand exceedingly fast, moving on a large foot that allows them to move forward effortlessly.

Also, the feeler or eye stalks appear to be longer on the Nassarius snails, when you compare them to the Whelk's extended appendages. Lastly, the shell. Of all the whelks I've caught, every one of them looked like this one, with the darker coloration with whitish patches. In 48 hours, I caught 71 of them in a 55g reef. Over the next year, I'd caught at least 50 if not more. No special efforts need to be made to breed these, as they seem to do so quite easily on their own. They can be super small (1/8" long) or reasonable large (1" long), depending on age and growth. The ones pictured above are very small.

Nassarius snails, on the other hand, are excellent for DSB (deep sand bed) owners, because they submerge themselves and move through the sand keeping it stirred. Occasionally an observant person will see their little snout poking up like a periscope. When food hits the water, they come out of the sand and seek food hungrily. They will climb the glass at times.

Whelks act like snails, and tend to be on the glass or rockwork. They will move across the sand when necessary, but never submerge themselves beneath the surface of the sand. Their main activity can be observed at night by flashlight, as they are nocturnal creatures. They eat clams, so if you have clams you don't want whelks! They also may eat other snails. Even though they were in my tank for over a year, they never bothered a single item and were part of the clean-up crew. However, one day I added a new clam and overnight they killed and consumed the entire thing in a few hours. I wanted to keep clams too, so they had to go. Here's a slightly blurry picture of one, which still shows enough detail to identify it as a whelk. 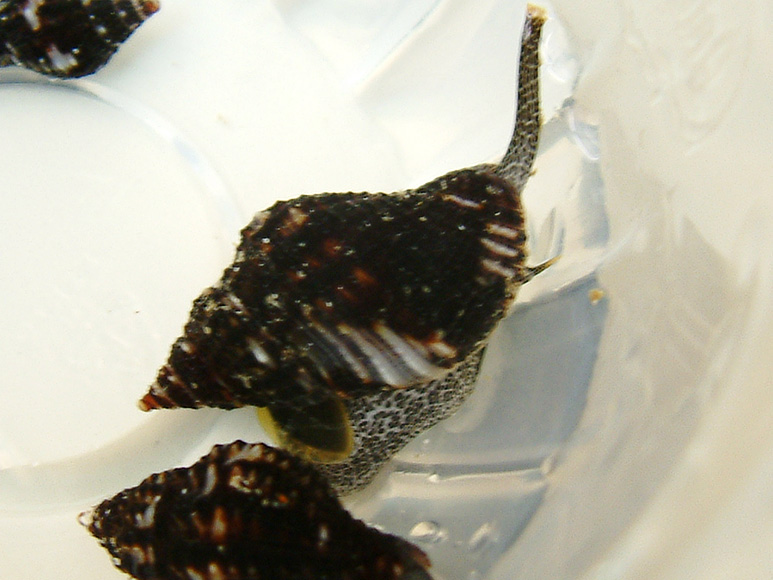 Occasionally I'll still find a tiny one in the refugium or sump of the 400g, and once there I'll even find them inside the skimmer or in a pump where they definitely don't belong.