For a long time now, I've followed discussion of extension tubes for macro photography. And a few years ago, I looked up what they cost and quickly dismissed them. However, in the back of my mind, I kept thinking "what if those are really what I need to get these stellar macro shots?"

Probably a year ago, I considered getting them again. I talked to someone that had them, and to someone else that had used some... one person said I could use the cheap plastic tubes (less than $10) and I'd be happy. The other person paid $200 for the Nikon brand specifically because it would pass the auto focus information from the camera to the lens itself. The cheap one would not, meaning all focus would be done manually. My eyes aren't young, and I wear corrective lenses daily. I was pretty sure I'd need the camera to focus on the subject more often than not. Plus I had huge concerns about an expensive macro lens connected to a cheap piece of plastic. What if it let go and my lens hit the ground?!

I did more reading, specifically people's opinions and reviews. As one might expect, the consensus was all over the place. I asked some local club members if they had a set I could borrow to see how they worked, but no-one responded. I dismissed the idea and decided I didn't need the hassle.

Last Sunday, I decided I had to have the extension tubes. My birthday was coming up, and I was committed to the process. Checking Amazon Prime, I found some inexpensive ones as well as the official Nikon set that was still the same price as it was years ago. As I checked the different brands, I made sure the part would fit on a Nikon D90. I read more reviews, trying to decide while heeding any warnings posted by other photographers. Shockingly, I saw some negative reviews of the Nikon set. I figured those would be tried and true, essentially bulletproof, "the" set to buy. They weren't as special as I'd thought, it seems. Why pay $200 for something you can do for $60, I mused. The Polaroid set listed all the same specifications, and after a few more deliberations it was added to my cart. Also added was a new rubber hood for the 50mm lens, a UV filter for the 72mm lens, and an off-shoe flash cable for the SB-800. 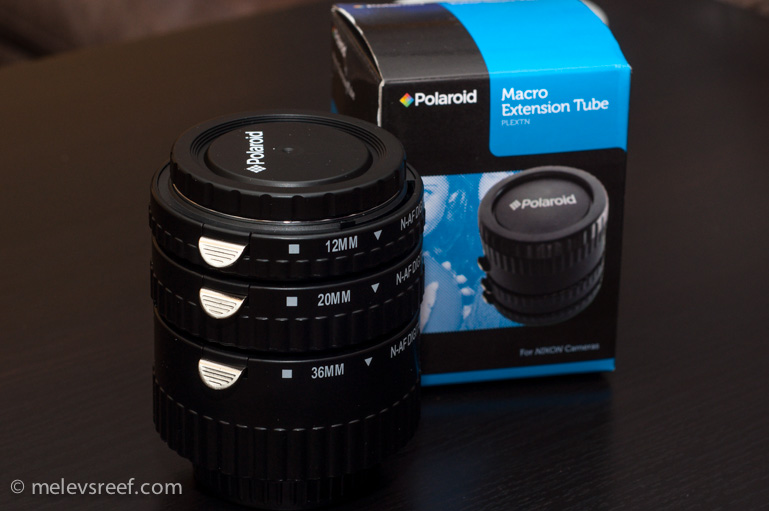 Click here to read the rest of the article on ReefAddicts.com (my other site): http://www.reefaddicts.com/content.php/407-Photography-Macro-Extension-Tubes